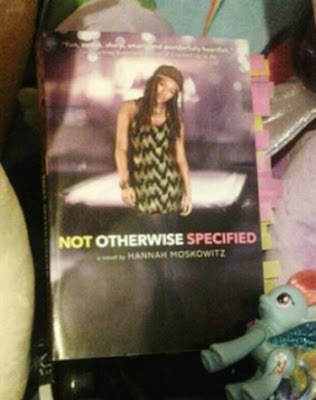 Not Otherwise Specified by Hannah Moskowitz is a YA contemporary novel about a Bisexual recovering anorexic black girl in love with ballet who is strong, flawed, layered, and very much human. Her name is Etta Sinclair.

She has a mother and a sister. She goes to an all girls private school. Her ex-clique is a group of lesbian girls that call themselves the "Disco Dykes". While Etta has never lied about her bisexuality, when she goes out with a boy, they drop her. One thing, out of many, that I love about Etta is that she owns her sexuality, defends it, and isn't ashamed to be sexual and like it.

She isn't "gay enough" for the gays or "straight enough" for the straight people. She isn't "sick enough", partially thanks to recovery, for anorexia. She isn't tall, thin, and controlled enough for ballet (She is quite the free spirit, and it's beautiful). At least that's what she keeps hearing from other people. And one of her dreams is to make it big in NYC, and she is from small-town Nebraska.

She struggles with a mom who isn't quite supportive. With ex-friends and people's Biphobia. With being bullied. With an eating disorder. With being told she doesn't really "fit" in anywhere.

She meets Bianca. A straight christian girl suffering from anorexia. They become friends, best friends. Bianca has a gay brother named Jesse. Bianca and Jesse's parents have a big problem with that. They take him to counseling, try and cry/pray the gay away. Meanwhile Bianca is getting worse and is the one that actually needs help...but gets ignored. She struggles with everything she's been told growing up, about how being gay is wrong, but she loves her brother unconditionally.

Growing up in a religious and using that as an excuse to be homophobic household I really relate to both of them as I realized at 13 (after trying to deny it) that I am Bisexual. I came out...my mom cried. Everyone said it was a "phase" or worse..that I was "greedy", would sleep around with anyone, was confused, couldn't make up my mind, or worse still..that the devil had a hold of me. I was so confused for my young teen years. I struggled with my faith and everything I was told growing up. No matter how hard I tried...I couldn't stop being Bi.

This book had me crying from the very first page and throughout the entire book. It hit me so hard and so close to home. While I am not anorexic and can't really speak from that point of view on it, as i've heard others say and read myself, it is written very honestly and respectfully on it. It is all told in Etta's POV. I love her voice and hearing her thoughts. I related to so much of it.

I read it in 2 days which for me, is fast. I didn't want to put it down. Never has a book clutched at my heart this way...and i'm an easy crier when it comes to reading books. This book came out early 2015....I wish it had come out about 15 years sooner. It would have ment the world to me then, and it still does, and I know it can for many others out there.

This is my favorite book read in 2015 and i'm sure it will stick with me. I recommend it..to everyone really but especially if it sounds like something you might relate to. Diversity in books is very important, and this book shines with it!

I gave it 5 out of 5 stars on Goodreads, I'd give it more if I could, and it's page on Goodreads is Here.
Posted by WickedJr at 7:28 AM No comments:

Winter Solstice: Short Stories from the Worlds of KP Novels
by Lincoln Cole