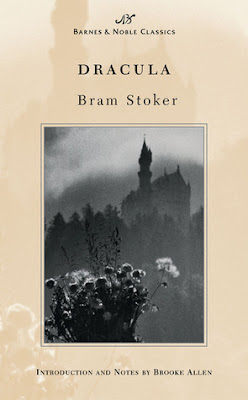 I have wanted to read Dracula for a long time now. Vampires? Yes! Where it's said to have really begun? Yes! Gimmie! Vampires and gothic-ness I thought it'd be right up my alley...

Sadly it fell really flat to me. I found it mostly boring. I wasn't even expecting much action, it's a classic, I know that. At times I enjoyed passages but for the most part it just felt..off to me. It's not just that I found it boring though, there is sexism strewn throughout the novel. Women are weak, men must be strong un-emotional people that never cry and just so much crap I wanted to throw book across the room and set it on fire. An instance here or there I could overlook and I know, I know, "It was written in the 19th century!" I don't give a damn at this point, it drove me nuts! I couldn't find much redeeming about this book. I did learn somethings, about history and such that I appreciated. I have seen the movie that really does follow the book though it's been awhile. I remember enjoying the movie, the book? Not so much. I really wanted to make sure I finished it though, so I did. It took me awhile but now I can say i've read it...and I kinda wish I hadn't.

Ultimately I gave it 1.5 stars and just want to move on from this book. Thank you to Dracula for doing all you did for the vampires and all, but please keep your crap in the 19th century. Sorry this isn't a good review.
Posted by WickedJr at 2:33 PM 2 comments: 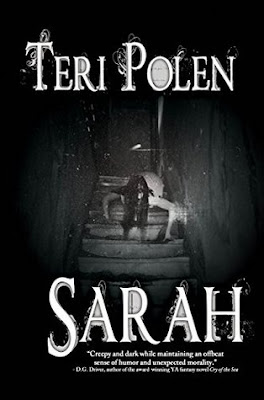 I heard about this book through a goodreads group i'm in, a group for horror lovers I believe, as it was on netgalley. It was published December 7th, 2016 and I heard about it in January. It sounded interesting so I picked it up. Thank you so much to Netgalley and Black Rose Writing!

"Seventeen-year-old horror fan Cain Shannon thought helping a ghost find her killers would be the supernatural adventure of a lifetime. Now, he just hopes to survive long enough to protect his family and friends from her.

A bet between friends goes horribly wrong, resulting in Sarah’s death. When she returns to seek justice against those responsible, Cain agrees to help her. But when he discovers Sarah has been hijacking his body, he realizes she wants retribution instead of justice.

Terrified of what could have happened when he wasn’t in control, Cain commands Sarah to leave his house - but exorcising her isn’t that easy. She retaliates against her murderers in bloody, horrific ways, each death making her stronger, then sets her sights on Cain. With the help of friends, Cain fights to save himself and his loved ones and searches for a way to stop Sarah before she kills again."

I'm not good at synopsis's myself. Anyway I quite enjoyed this book! I would call it light horror myself but still enjoyable. The first 2/3 of the book I found mostly funny as well as getting to know the characters and plot, though it did start off a bit slow but did get going. The last 1/3 of it got rather creepy with some very well written scenes and had me reading faster because I had to know what was going to happen! That ending might give me nightmares, honestly I couldn't stop thinking about it as I fell asleep last night.

There is a good dose of unexpected morality in the book too that surprised me. I was just expecting a light creepy read, and I did get that, and also plenty of thought-provoking things. I didn't always agree but that could just be me not being as...nice?...and more emotional than I thought I was. It's not bad but I also don't know how to describe it. Some stuff was bothering me for a bit that did end up being mentioned in the text in time that I was very grateful for! It's about a kiss, if someone says no, that should be the end of it! Having to do with the whole bet that got Sarah killed in the first place. I liked the points made about society's mindset towards sexual assault, especially with jocks and guys that seem to think they can do whatever they want to girls. It was shown that that is not okay, which I really appreciated.

Another thing I just *have* to mention I loved it so much is that I had been thinking "He's going to end up with ptsd from all this...no way is he not going through all that without trauma" and sure enough, it was mentioned! It's not a huge thing but lasting affects, and even the name ptsd, are mentioned and I just loved it so much!

I really enjoyed the characters, in particular the main character Cain and his friend Lindsey. I felt they were both likable and relate-able, to me they were. I also enjoyed his other friend Finn as well as Cain's little sister and mom. The relationship between Cain and his sister Maddie was so sweet.

I did have some issues with Sarah but overall found her a fun vengeance ghost. I could understand very well why she turned evil, even if that doesn't excuse some of the things she did and ultimately turned her into an evil vengeance crazed ghost. It's a quick read, some humor and pop culture thrown in, some teen emotion, a dose of morality, general creepiness and a very nice twist to it! It was easy to read and overall I gave it 4 stars. I'd recommend it to horror fans and YA fans alike. If you are easily scared and want to read it anyway, maybe keep the lights on. ;)
Posted by WickedJr at 1:03 PM 2 comments:

Email ThisBlogThis!Share to TwitterShare to FacebookShare to Pinterest
Labels: horror, YA 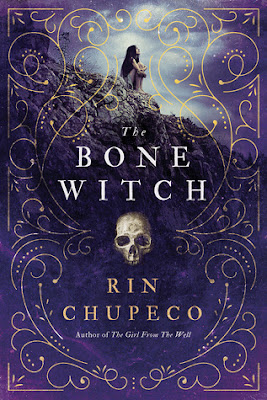 "When Tea accidentally resurrects her brother from the dead, she learns she is different from the other witches in her family. Her gift for necromancy means that she’s a bone witch, a title that makes her feared and ostracized by her community. But Tea finds solace and guidance with an older, wiser bone witch, who takes Tea and her brother to another land for training.

In her new home, Tea puts all her energy into becoming an asha — one who can wield elemental magic. But dark forces are approaching quickly, and in the face of danger, Tea will have to overcome her obstacles…and make a powerful choice."

I got an ARC of this from netgalley. Much thanks to Sourcebooks Fire and Netgalley. I feel bad for not liking it. I had to DNF it after reading 68%.

I was mostly bored through the whole book. Nothing happens. There is a lot of talk about what everyone, and I mean every woman, is wearing. About 90% of this book is hua, hairpin, fashion, and food descriptions, 5% dancing and singing and 5% actually entertaining. A lot of complex details were described about minor characters, about all their huas and fashion choices and a bunch of things that had me wanting to scream "I don't care!" at my tablet after awhile.

I thought a bone witch sounded interesting but what I feel I got was a bunch of fashion, dancing and singing...for men. There was also a lot of talk of parties and entertaining, the asha have to entertain...the men. They seriously felt like nothing more than glorified dolls. There is even talk about how women shouldn't even show their ankles or wear the "bold" color red, because it's isn't "appropriate" and instead of maybe saying that is crap...her mentor says that's the way it is and to get used to it. These powerful witches ended up completely ok with spending their evenings sitting through mansplaining, and encouraging their apprentices to get used to it as well...and that is where I couldn't take it anymore. Before I was already very bored, the characters fell flat to me and it just felt like it was never going to end or do anything remotely interesting...and then that. I just couldn't anymore, and i'm sorry. Powerful witches...having to do as men say, sit through a bunch of mansplaining and entertain the snobbish men with a bunch of work at singing, dancing, and looking exactly the way the men want them to, describing everything they wear in extremely long detail and what they eat. Also a lot of chores, just endless chores.

I got to the point I don't even care what she did. I don't know what she did or what's going on, and I don't care to continue with the torture to find out. I'm sorry, I know that's harsh, but it really felt like that to me. I ended up giving it 1 star. This is the first book of hers that i've read and I have seen people say they enjoyed another book of hers, the girl from the well, and not like this one, and I am willing to give another book of hers a shot. I'm sorry this just wasn't the one for me.
Posted by WickedJr at 10:09 PM No comments:

Winter Solstice: Short Stories from the Worlds of KP Novels
by Lincoln Cole